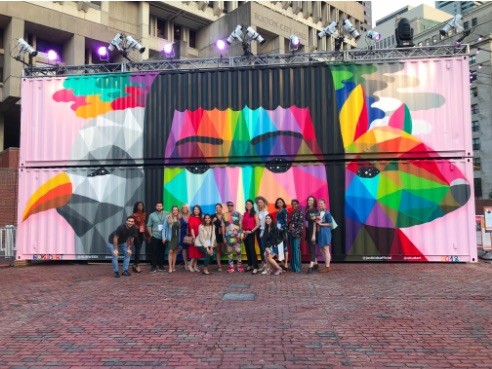 "Mermaids and Other Magical Creatures" Okuda San Miguel
next >

OKUDA SAN MIGUEL’s unique iconographic language of multicolored geometric structures and patterns on the streets, railroads and abandoned factories around the globe has made him one of the world’s most recognizable street artists of today. Rainbow geometric architectures blend with organic shapes, bodies without identity, headless animals and symbols that encourage reflection in artistic pieces that could be categorized as Pop Surrealism with a clear essence of street forms. His works often raise questions about existentialism, the universe, the infinite, and the meaning of life.

Okuda: “I aim at converting the monochromatic concrete structures and buildings into vibrant places that are filled with color and positivity, helping and hoping to change the lives of people. I want people to stop looking at the pavement and start looking up and around.”

Okuda’s HUBweek mural speaks to the relationship between humans and animals, and to themes of respect, diversity, and harmony among beings and with our environment.

The artist’s works can be seen in streets and galleries around the world: Brazil, Chile, India, Japan, Mali, Mozambique, Mexico, Peru, South Africa, United States, and throughout the European continent.